Being Inside The Mind Of Van Gogh

You wouldn't expect to see Van Gogh in Elgin. Maybe in Batavia - that windmill town.

But for Walkabout, Vex Theatre will be presenting Don Nigro's short bolt of theatrical lightening -"Netherlands" - featuring Van Gogh and the Dutch girl, who lovingly badgers him about clabber and all things Dutch. It's a comedy - of sorts.
Cathleen Ann, Producer at Vex Theatre, says the play packs a punch. 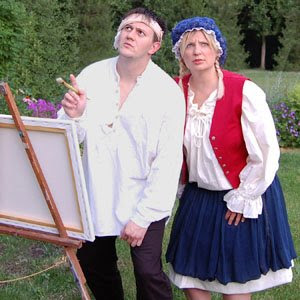 “The playwright does a fine job capturing the essence of Van Gogh, offering a creative interpretation of what it might have been like, living in his head. This play is very funny and odd, but also oddly touching. Van Gogh was an incredibly complex man whose talent superseded the mental illness he faced. We can only imagine what it must have been like, during the last year of his life. He was incredibly ill, yet astoundingly productive with his painting.”

The show also features Adam Krause, playing Van Gogh and Debbi Dennison (both pictured) as the mysterious Dutch Gril he meets in the park - or in this case Ravenheart Cafe - a woman who may be a hallucination or a fellow mental patient. It’s for the audience to decide.
Rich Geiger directs the play. To bone up on Van Gogh, Geiger watched countless documentaries and movies in order to get a better handle on Van Gogh's life. After all, how many artists are famous for cutting off their ear?
Geiger thinks the play is a great tie-in with Walkabout, a festival that combines the performing and visual arts. “Acting can be just as much of an art as painting," he says. "It creates an image that leaves an impression in the mind of the viewer.”
Geiger and his cast have spent a lot of time discussing Van Gogh’s work, especially “Wheatfield with Crows” (a painting referenced in the play) and the emotion that may have been behind the way he laid paint on the canvas.
The challenge of the show, according to Geiger "is to show the complexity of this larger-than-life man in an entertaining, enlightening way."
"Netherlands" will be playing at the Ravenheart Cafe in downtown Elgin. It will be the second play presented in Walkabout. Find out more about Vex Theatre at http://www.vextheatre.org/

Posted by Janus Theater Company at 8:44 AM