Theatre In The Round, All Around Elgin

It's been a busy week getting Walkabout up to speed, so here's another story - this time from the Pioneer Press - about taking in some theater on your feet.

Experience theater on walk around Elgin

Shakespeare wrote, "All the world's a stage," and he would've been pleased and impressed with "Walkabout: Theater On Your Feet."

An idea developed by Sean Hargadon, 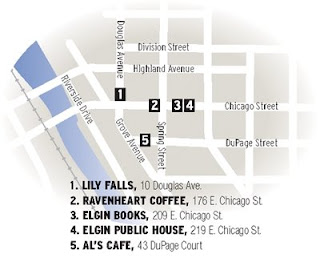 "Walkabout" presents a variety of artistic entertainment, including five short one-act plays, music and mixed media art. The event will entail groups being led by guides to various venues in and around the revitalized downtown Elgin area. Like a progressive dinner party, the audience will partake of artistic offerings at one venue, then move on to another at regular intervals. The event will be held on three Saturdays, Aug. 16, 23 and 30.

PHOTO: A downtown map of Elgin where Walkabout will be performed.

Inspiration in Paris
"The seed was planted along these lines when I was on a trip to Paris with my wife a few years ago," said Hargadon, who is the producing director for Janus Theatre and a member of the Elgin Arts Commission.

"There was this Festival of Music going on in Paris, and everywhere, on streets, sidewalks, cafes, there was music of all types, even Rage Against the Machine," he said. "It was hip without trying to be hip, and I thought why not do something like this in downtown Elgin. We have lots of history, and it is being revitalized, changing before our eyes."

"I pitched the idea to the Elgin Arts Commission and, with their blessing, started putting this together," he said.

Starting out
The theater walk begins at the Elgin Art Showcase, then proceeds to Lily Falls, Ravenheart Coffee, Elgin Books, Elgin Public House and Al's Cafe. The local theater groups involved in the event are Face-T-Face, Vex Theatre, Independent Players, Nothing Special Productions and Janus Theatre. The theater group with the best show will receive $500.

Live music will be provided by The Rory Miller Band (folk) on August 16; the Elgin Symphony Orchestra Quartet (classical) on August 12; and the Ain't No Nothin' Jazz Band (traditional, pop) on August 30. Thirty-two artists are involved in the Alley of Art showcase area at DuPage Court, with about 10 displaying each week.

One of the plays, "Netherlands," presented by Palatine-based Vex Theatre, concerns the tragic final days of Vincent Van Gogh, as his mental illness progresses to his (implied in the play) suicide. Van Gogh (played by Adam Krause) meets up with a mysterious "Dutch girl" in a park, played by Debbi Dennison, of Schaumburg.

Audience intervention
"Van Gogh is obsessed with his painting, and my character is obsessed with everything Dutch, but the underlying thing is they're trying to connect, and play a kind of tug of war game for attention," said Dennison. "How it ends is left up to the audience. She may not be real, just a figment of his imagination."

Hargadon added: "The audience is your extra character in a play, and has an integral part of the performance. Some of the pieces talk directly to the audience."

Cathleen Ann, co-founder of Vex Theatre, commented on the unusual event: "We like that the audiences will be exposed to many different theatre groups with different styles in one afternoon. It will be a novel experience for most theatre-goers."

Hargadon noted an incentive for early advanced registration will be goodie bags with items like coupons and cover programs. Some of the businesses also will be offering samples for visitors. There will also be a limited number of T-shirts available.