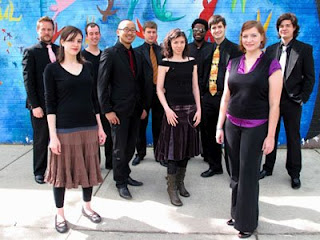 Think classical music is dull and stuffy? Think again! Anaphora is a local group that "exists to bring musical classics into this age, to fuse the fresh with the familiar and to convey one coherent statement about the music of our time." In other words, this is not your grandfather's classical music.

Anaphora was formed by Aurelien Pederzoli (Violin) and Cory Tiffin (Clarinet) who met at DePaul University in 2004. Just a year old, their group is already taking the local music scene by storm, even garnering rave reviews from the Chicago Tribune for having "a palpable enthusiasm that’s contagious."
Specializing in fresh takes on the classic classical pieces, as well as pop-classical fusion, Anaphora thrives in small, alternative venues...places you might not expect to see classical music. Don't miss them at Walkabout on August 15 from 2-5pm at Du Page Court.
For more information, visit: http://www.anaphoraensemble.com/
Posted by Janus Theater Company at 5:56 PM