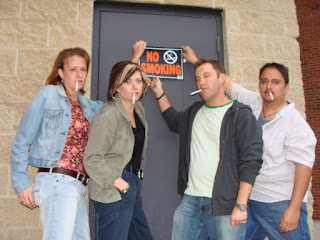 Walkabout: Theater on Your Feet is all about bringing fresh and new art to the community. And few things are as fresh and new as A Tower of Strength Players, the western suburbs’ newest theater company, who are making their official debut at Walkabout. Formed by the South Elgin husband and wife duo of Artistic Director, Jeni Dees, and Executive Director, Ish Rios (both local theatre veterans), the group promises “the unexpected.” Says Dees, "I really want to start out focusing on bringing a new twist on old classics.”
The piece they selected for Walkabout, "Smoke Scenes" by Nick Zagone, is anything but classic, but it is certainly has a twist! “I like it because although it is a scripted piece, it plays like an improv piece," says Dees, "It is 51 scenes in 10 minutes using the word smoke. It is very fast paced and witty.” Joining her on stage is her husband Ish as well as cast members Leah Rae and Dave Amato. They will perform at Elgin Books, 209 E. Chicago Street.

The company says rehearsals are going great. "It was very fun boiling down Edward Albee, Sam Shepard and David Mamet to a few specific choices to convey the scene," reports Dees. "We are looking forward to the challenge of performing over the top humor in a small playing area."
Posted by Janus Theater Company at 9:59 AM

Sounds awesome! I can't wait to see it!!!