The Daily Herald Day After Story

We were fortunate to have the Daily Herald come out last Saturday and check out Walkabout. Here's what Harry Hitzeman at the Herald had to say.

The Elgin Cultural Arts Commission served up a smorgasbord of the live theater that the city has to offer Saturday - and made plenty of folks hungry for more.

The first day of "Walkabout: Theatre On Your Feet," was a hit Saturday, with organizers selling out all five tours. 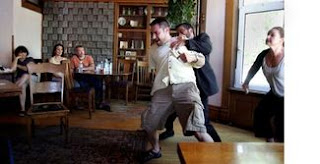 The first-time program, which continues Aug. 23 and Aug. 30, takes participants on a one-hour tour of downtown to five locations for five short plays by five different theater companies.

PHOTO: Janus Theatre mixes it up with Playwriting 101: The Rooftop Lesson by Rich Orloff at Al's Cafe.

"I liked having the opportunity of being able to sample the different theater companies in town," said South Elgin resident Jude Cavallaro, who went with her husband Dennis Matheson.

Sean Hargadon, producing director of the Elgin-based Janus Theatre, said all five tours completely sold out. He said organizers tried to limit each group to 12 to 15 people, but they expanded it to 20 so no one would be turned away.

The tour ends at Al's Cafe and Creamery, 43 DuPage Court, emptying groups onto an "Alley of Art" that included live music and artists' displays set up along the brick sidewalk.

"The next two Saturdays, there's going to be more artists out here," Hargadon said. "This is great. We're getting a lot of positive feedback."

The performers also enjoyed the change of pace.

"It's a very different feel from what I'm normally used to. But it gets us actors closer to the audience," said Adam Krause, who played Vincent van Gogh in a two-person play with fellow Vex Theatre member Debbie Dennison at Ravenheart Cafe, 126 E. Chicago St. "You can interact more. It really enhanced the experience for myself and the audience as well."

Elgin resident Mike Cain and his wife, Laurie, both enjoyed the activity.

"It was really interesting, a lot of fun," he said. "It's good on a lot of levels. It gets people downtown, (the plays are) the right length."

That's music to the ears of Sylvia Grady, city liaison to the Cultural Arts Commission, who said organizers hope to make the Walkabout an annual event.

She also noted the downtown streetscape improvements in the Walkabout area should be done next year, allowing for more artists and making it easier for people to get around.
Posted by Janus Theater Company at 8:28 PM

Glad you had such a successful first day.