Two Out Of Three Ain't Bad

Well, we said a prayer and avoided the rain yesterday, which was a great thing, because Walkabout grew by almost 50% in one week.

That’s right. We were sold-out on our first Saturday (8/16), and we felt that the second Saturday would have more people, which meant we needed to accommodate the demand for new audiences, so we added a 2:15 pm tour and expanded our capacity to 20 per group instead of the normal 15.

We were right to make the changes, because we 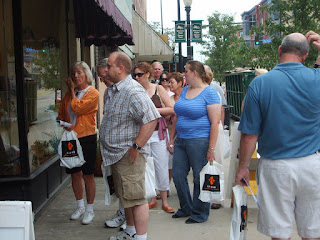 had over 100 people attend Walkabout yesterday, and that didn’t include people that came out to see the Alley of Art show and hear the Elgin Symphony Orchestra Quartet.

PHOTO: This tour group of 20 makes its way into Lily Falls for a Walkabout performance.

It was a wonderful. Perhaps a little too muggy, but still, we were able to get all the tours in, despite some small drops from some rain clouds above.

The day also had some backstage drama when the Independent Players production of “The Morning Report” was cancelled because the actor performing the piece broke his arm. Fortunately, he’s going to be alright.

As well as Walkabout has gone, last week there was a follow-up story in the Daily Herald (8/17) by Harry Hitzeman that praised the event. Unfortunately, some people responded to the paper’s website with some snarky comments.

Today, Hitzeman addressed those comments along with others directed toward Elgin in general.

“One of the buzzwords for newspapers these days is ‘interactivity’. You can see it on the Daily Herald website…and you can experience it and voice your opinions by commenting on stories. Some comments…are really moving and refreshing. But other comments are often so mean spirited they make me want to puke. Like last Saturday [8/16] for the “Walkabout” live theater event in downtown Elgin.”

Hitzeman goes on to say how people have no problem teeing off on what Elgin does as a city. And he admits that there are good things about Elgin and things that need improvement. However, he says, people should take care and be mindful when they make comments. At the end of the story, he challenges readers to send negative comments to him in the future.

What can I say to all of this? To quote a famous phrase from the past, “Give ‘em Hell, Harry!” 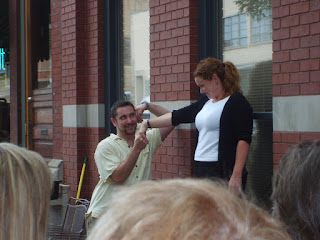 Sure, there are things in Elgin that need to be better. However, what’s important is that things are happening in Elgin. We’ve come a long way in the last few years.


PHOTO: Josh Raddie and Patricia True perform for Janus Theatre al fresco at Al's Cafe. Next week they will be back inside.

Recently, I was talking to Pat Jamin at Al’s Café and she said this year has been unique, because she’s seeing so many new faces walking downtown and checking out her restaurant.

And one thing I’ve noticed is all the people attending Walkabout that don’t reside in Elgin. Many people are hearing about the event and coming in from Chicago, Algonquin, Northbrook, etc.

If you couple this with the loyal Elgin audience that is already making its way downtown, you begin to see how things are taking a turn for the better. Again, it’s all about getting people to hit the streets and take a walk – anywhere.

All of us at Walkabout are looking forward to this weekend, which will be our last performance of Walkabout and the Alley of Art. Maybe we’ll be able to generate some more positive feedback, avoid any injuries, and keep the rain away.
Posted by Janus Theater Company at 12:48 PM