It All Begins With The Sidewalks

It’s been a few days since I posted something. Much of this is because I spent a lot of time at Fox Fire Fest at Festival Park in downtown Elgin.

I’m always excited to see crowds of people making their way around the downtown. In this case, they were all heading south to the park. 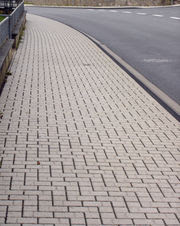 This got me thinking. One of the reasons to produce Walkabout: Theater on your Feet and the Alley of Art was to create more action in the downtown.

In essence, theater on your feet is all about getting people on the sidewalks; walking and talking, interacting and mingling, thereby creating a pulse that you can feel. This might sound romantic, but it sure beats the heat of empty concrete in the summer. What’s more, its fun to watch the various faces downtown. That’s why the French face all their café tables and chairs towards the street: the entertainment is right in front of you.
PHOTO: Where the sidewalk ends? No, that's where it all starts.

In recent months, downtown Elgin featured Rib Fest, the Festival Of Balloons and, Fox Fire Fest, just to name a few. While these events are exciting and important, they were all based in Festival Park.

Getting people to experience other places is also necessary. This means having events in local neighborhoods. Events like the 4th of July Parade off Douglas Avenue, The Amazing Race throughout downtown, and the Elgin Cycling Classic in Lord's Park, help to create foot traffic in different places.

This idea of people walking on sidewalks seems fundamental. But in some suburbs, you won’t find a sidewalk to save your life. In downtown Elgin, many of the sidewalks, and the plumbing underneath them, are being replaced in favor of newer construction.
To understand the benefits of people walking on the sidewalks, all you have to do is take a look at “The Death and Life of Great American Cities" by Jane Jacobs. Jacobs was considered one of the most outspoken critics of urban development in the 20th century. When reading her work, it sounds refreshing today. Here’s an excerpt:
"The sidewalk must have users on it fairly continuously, both to add to the number of effective eyes on the street and to induce the people in buildings along the street to watch the sidewalks in sufficient numbers. Nobody enjoys sitting on a stoop or looking out a window at an empty street. ... Large numbers of people entertain themselves, off and on, by watching street activity."

For me, that quote says it all. And hopefully Walkabout: Theater on your Feet and the Alley of Art will help to bring more “street activity” downtown.
Posted by Janus Theater Company at 8:22 PM