She’s looking forward to meeting you. And she wants to talk to you about theater. Now if she could only find her notes. 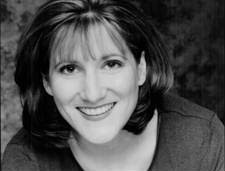 Lynn has played some tough roles in her acting career, like Sally in “Talley’s Folly,” Beline in “The Imaginary Invalid,” and Sonia in “Life X 3.”

She’s also worked with some veteran Chicago theatre companies, such as the Raven Theatre, Bailiwick Theatre and Cobalt Ensemble Theatre, to name a few.

But now award-winning playwright Christopher Durang has given here a whole new challenge with Mrs. Sorken. Durang is known for his outrageous and often absurd comedy that has a healthy does of satire in it.

“Mrs. Sorken” is no different. The set up is simple: a woman waits to greet a group of theatergoers, so she can talk to them about why people go to the theater. As it turns out, the question is harder answer than she thought.

I caught up Lynn to see how things are going with the show.

How does it feel playing Mrs. Sorken?

It’s a great joy any time you get the opportunity to play a role written by Christopher Durang. He’s a brilliant comic writer. This particular play reminds me of one of his well-known one-act plays called “Sister Mary Ignatius Explains It All For You.” When Mrs. Sorken, like Sister Mary Ignatius, first starts talking to the audience, she appears to be a completely reasonable person. But as the play goes on, the discussion disintegrates into pure absurdity. After a while the audience has no idea what will come out of the character’s mouth next. As an actor, that is great fun!

Mrs. Sorken initially comes off as someone who the audience members might like to engage in a lively discussion over a few cocktails. She is friendly, enthusiastic and isn’t shy about expressing her views. But by the end of the play? Well, the audience might have a slightly different perspective of her!

What do you think about doing a play at Lily Falls?

I am excited about the opportunity to perform in the unique setting of Lily Falls. It is a lovely shop and I’ll be integrating the space into my performance.

What can the audience expect from your performance?

Unlike a traditional theatrical setting where the audience is passively watching, the audience for Mrs. Sorken will actually be a part of the play. I will be interacting with them and bringing them into the theatrical experience.

How do you feel about doing theatre without lights and sound?

If you think about it, this type of performance has been around since the beginning of theater. The ancient Greeks or the actors in Shakespeare’s time didn’t have lights and sound. They only had themselves—and what they could convey to the audience through their voice and actions. That’s exciting and terrifying at the same time because it’s totally up to me!

Well, there you have it. Another actor courageously prepares to face the audience in what Shakespeare would call the “undiscovered country.”

This short play will be presented by Face-T-Face Productions at Lily Falls off Douglas Street, across from Villa Verone.
Posted by Janus Theater Company at 10:22 PM